El Pollo Maniaco: A Year Later, And Better Than Ever

It is hard to believe that a full year has gone by since I first had the pleasure of telling you about El Pollo Maniaco, an authentic eatery in Tanner whose food is what you would find if you were eating in the coastal Mexican state of Guerrero. I can truly say that the many times I have either eaten there at the restaurant, which is located at the intersection of Hwy 31 and the Huntsville-Brownsferry/ Tanner Road, or have ordered food to go, I have left with a full tummy and a happy heart.

I particularly enjoy telling the stories of local entrepreneurs who come to America, fall in love with it, and partake of the possibilities that can only happen in the free market; and Poli and Guadalupe Avelino have done just that. Poli came to the States when he was 16, and settled in Los Angeles. He spent 30 years in the restaurant industry, and his place was featured in an article which appeared in the Los Angeles Times. He had never planned on living in Alabama, but in 2010, moved here to help a cousin who had a restaurant and bakery in Russellville. In 2018, the opportunity arose for him to have his own place; and since then, we have been blessed to have El Pollo Maniaco join the lineup of great eating establishments that call Athens-Limestone County home. 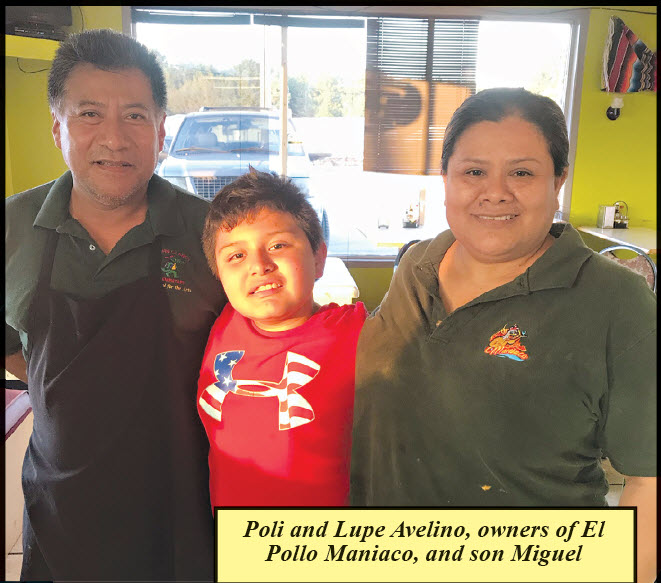 Poli’s story is unique in that originally he did not plan on having Mexican food on his menu, even though he comes loaded with family recipes, spices, secrets, experience, and cooking methods that more than qualify him to successfully bring Guerrero here. What he is also good at is American food, and his plan was to have a place that served American breakfasts and homemade hamburgers from 6 a.m.-2 p.m. However, word got around about how good his “home cookin’” was, and because of public demand, El Pollo Maniaco found a way to do both.

“We never expected the kind of support we have received,” Poli told me when I asked him to give a re-cap of the last year. The place is busy, and word has gotten around to everybody about the food, not just Hispanics. We have people who drive here from Madison and Huntsville to eat, and are begging us to open up a second place,” he said. When you go to Pollo Maniaco for lunch, you’ll see crews of people who work together also eating together, folks of every color and age group sitting down, and in addition, there is a brisk take-out business. They are quick, too. If you are in a hurry, I can say from experience that your meal will be right up. Another surprise has been the start of the catering arm of El Pollo Maniaco. “We never expected that, either,” said Poli with his eyes wide. “I am happy here,” he said with a smile. 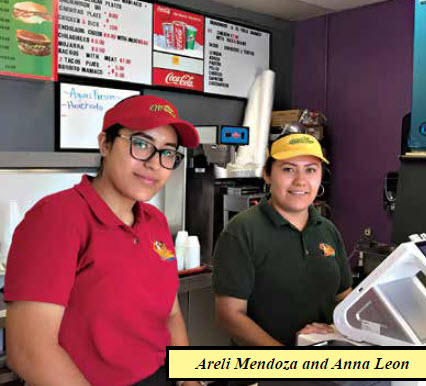 So, what is on the menu? From the Mexican side, what you will find are generously-sized portions of things such as a carne asada (steak) burrito that includes rice, beans, onions, cilantro, cheese, salsa, and sour cream for $7.99, and the chicken burrito has the same ingredients for one dollar less. You can get individual chicken tacos for $1.50 and steak tacos for $1.99 each. There are Mexican plates served with rice, beans, and fresh tortillas, and they vary from chicken, steak or shrimp fajitas, mixed fajitas, to tilapia. Pollo asada, the incomparable grilled chicken starts at $4.99 with 2 pieces of chicken, rice, beans, tortillas, and salsa, to a whole chicken (8 pieces) with the same sides for $12.99. There are also family dinners of 4 ¼ lb burgers, 4 French fries and 4 drinks for $18.99.

On the American side of the menu, a breakfast burrito (no meat) features 3 eggs, hash browns, cheese and salsa for $3.99. If you add your choice of bacon, sausage, ham or chorizo, the burrito is $5.99. There is an extensive selection of breakfast dishes with eggs cooked to order, hash browns, toast and jelly, with meat that ranges from sirloin steak to grilled chicken breast to huevos rancheros. Same goes for omelettes, French toast, hot cakes, sandwiches of all kinds, and burgers. There is also an ample kids’ menu, and drinks start at $1.50. If you are looking for Mexican or American food that is “real and reasonable,” come to or call El Pollo Maniaco for a true feast, whether you dine in or take out.
By: Ali Elizabeth Turner 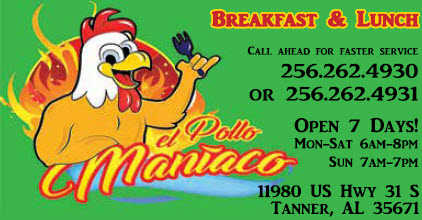