All Things Soldier: Gary Sinese And The Snowball Express

Gary Sinese, who became a household name as “Lt. Dan” in the movie, Forrest Gump, made a promise in 2006 to a soldier that he would take the soldier’s family to Disney World if he lost his life protecting us. Fulfilling that promise led to the formation of the Gary Sinese Foundation, the Snowball Express, and the Lt. Dan Band, which all serve soldiers and the families of soldiers in different ways. At Christmas time, the Snowball Express sponsors a trip for the families of the fallen. Recently, Sinise partnered with American Airlines and Disney to take 1,000 family members to an all-expense paid, 5-day trip to Disney World. He flew with them and recorded their joy.

“The important ingredient is that these kids meet each other and they know they’re not alone,” Sinise said. “They make friendships that last a lifetime.” Families from over 87 cities around the world got a chance to visit the “most magical place on Earth.” The kids are always accompanied by a surviving parent or guardian.

This year is the 14th anniversary of the Snowball Express. Sinise has always desired that the families of the fallen get to have an amazing holiday as part of the healing process. “I’ve gotten to know a lot of these families,” he said. “I love them and I want to just do something to help them through.” 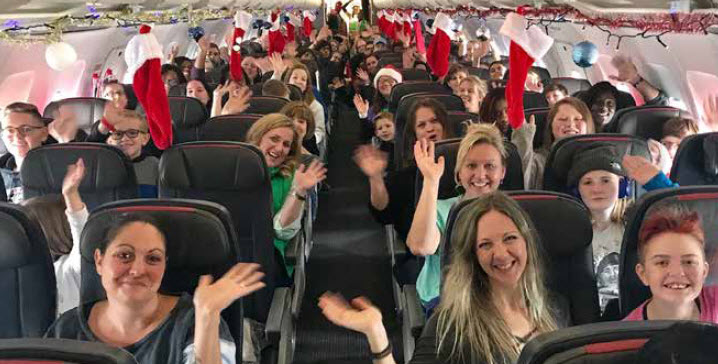 Gary Sinese is one of those guys that can be accurately called “the real deal.” He has never been a soldier, but did an excellent job of portraying one. In particular, his role as “Lt. Dan” gave us a beautiful and brutal idea of what ‘Nam vets went through after they came home close to 50 years ago. In the movie, the way that he fights with Jesus and then rebuilds his life is something that inspires me to this day.

In spite of his great success as an actor, Sinese has not let it go to his head, and you don’t see him on the front of the tabloids. Instead, he has paid it forward, and not just with the Disney trips. Last year, a touching tribute video was made that featured people as politically diverse as Robert DiNiro and Patricia Heaton. Tom Hanks brought Sinese to tears when, at the end, he said in his Forrest Gump voice, “Thank you, Lt. Dan.” In addition to Tom Hanks, retired four-star Army General and former Chairman of the Joint Chiefs Colin Powell added this: “Thank you for all the things you have done for our men and women who have served our nation. Not only what you’ve done for them but for their children, what you’ve done for their families, what you’ve done to help them rebuild their lives.”

“Lt. Dan” has also partnered with the Disabled American Veterans organization and, in addition, has been all over the world with his band to entertain our troops. Though he is not a soldier, I know from experience that soldiers love few people as strongly as civilians who make it a quiet and ongoing part of their lifestyle to support our soldiers. Merry Christmas, Gary Sinise, and thank you from all Americans who support those who serve. You make us proud, and God bless you!
By: Ali Elizabeth Turner